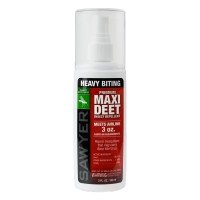 Because of the way they slow down the evaporation of the DEET, lotions always last considerably longer than sprays of comparable DEET concentrations. Sprays have the advantage of being able to be applied to sweaty skin. Since repellents work as a 3″ barrier, clothing applications can often protect 6″ of exposed skin and significantly reduce your usage on skin. Our recommendation: DEET lotion on skin and Permethrin spray on clothing.


The reason you were told to “get something with at least 30% DEET” is because under older guidelines this was true. Simply put, the higher the percentage of DEET in a given formula, the longer and more effective the protection from insects. Until the introduction of Sawyer Controlled Release Insect Repellent, we would have recommended Sawyer Maxi-DEET® 100% DEET Insect Repellent for the skin. People often confuse concentration with dosage. Lower “dosages” of 100% DEET or DEET mixed in a Controlled Release lotion or even a standard lotion work better than alcohol-based sprays.