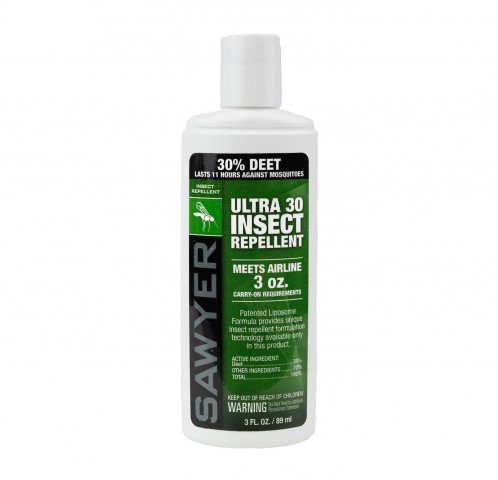 Deet Ultra 30™ uses a liposome controlled release system similar to the earlier generation of polymer-based controlled release systems. The liposome envelops the DEET and slowly time-releases it as needed, thereby extending the effectiveness of the repellent. Unlike polymers, however, liposomes are a natural compound which is more comfortable to the skin and easier to wear.

The reason you were told to “get something with at least 30% DEET” is because under older guidelines this was true. Simply put, the higher the percentage of DEET in a given formula, the longer and more effective the protection from insects. Until the introduction of Sawyer Controlled Release Insect Repellent, we would have recommended Sawyer Maxi-DEET® 100% DEET Insect Repellent for the skin. People often confuse concentration with dosage. Lower “dosages” of 100% DEET or DEET mixed in a Controlled Release lotion or even a standard lotion work better than alcohol-based sprays.